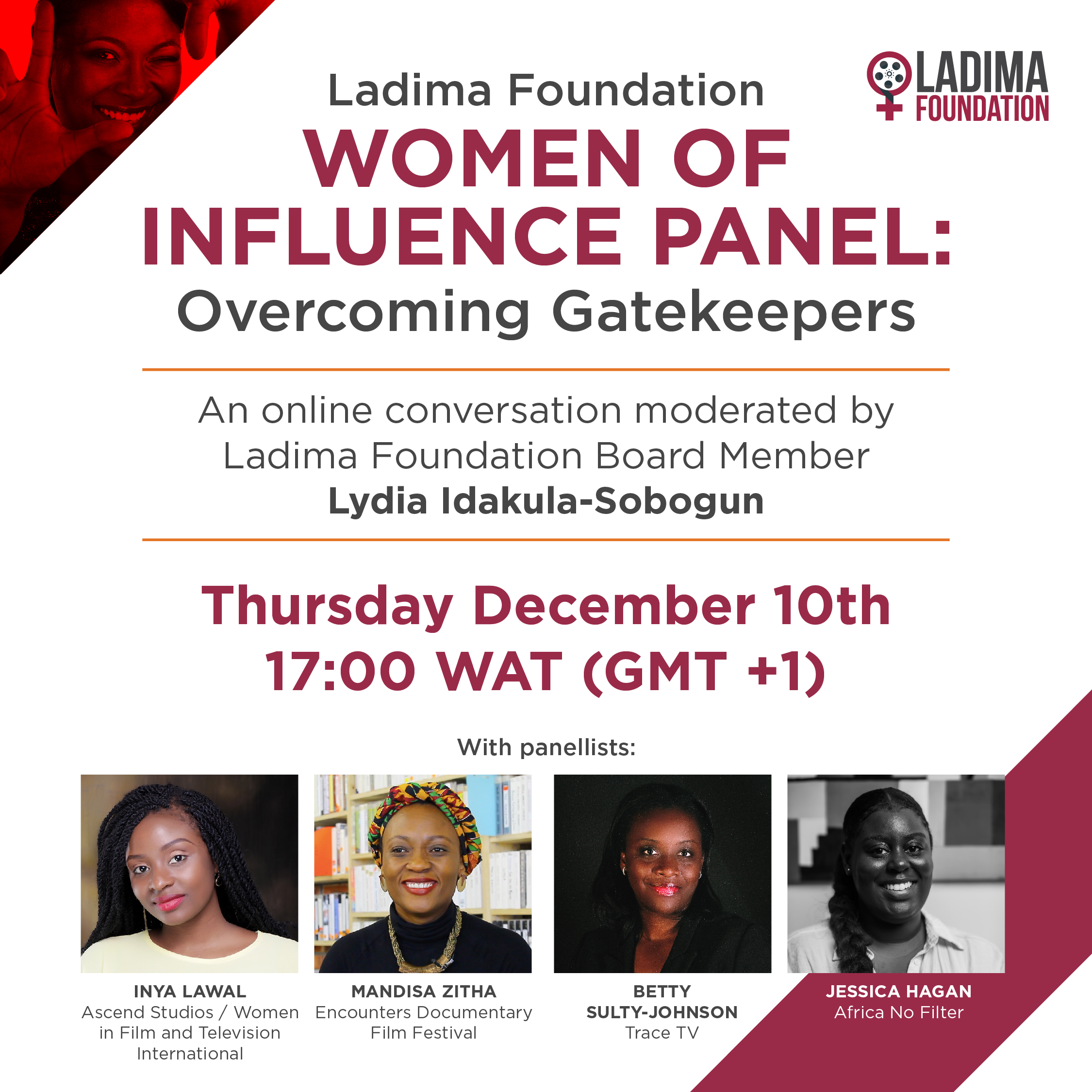 As one of its on-going interventions, The Ladima Foundation has hosted a series of Women of Influence panels over the past few years. With Covid-19 disruptions to physical events in 2020, The Ladima Foundation has decided to host a “virtual” Women of Influence Panel as a way to make the discussion as accessible as possible to audiences across the continent.

The Women of Influence Panel on December 10th 2020 at 17H00 WAT (GMT +1) will focus on an issue that often gets raised by both aspiring and professional filmmakers alike, particularly those already disadvantaged or facing exclusion, such as women, the topic of gatekeeping and lack of access and inclusion.

Gatekeeping and gatekeepers refer to a process where through actual obstructions to access, or the perception of obstruction to access, certain groups or individuals are excluded from accessing opportunities. Gatekeeping often takes place at an institutional level where large organisations, from film festivals and events, to funders, donors or broadcasters do not welcome (or seem not to welcome) new entrants or participants.

Register here to attend the webinar.

The discussion will be moderated by Ladima Foundation Board Member, Lydia Idakula-Sobogun. On the panel will be the following respected experts:

Inya Lawal is an entrepreneur working to be a world changer. She works across Film, TV and brand consultancy. Her company – Ascend Studios – produces TV and feature content, and its subsidiary Ascend Talent Management, manages the careers of talents from Africa and its diaspora.

Inya serves as the secretary on the board of the Women In Film and Television International (WIFTI); and as president of the Women In Film and TV Africa (WIFT Africa). She is also a Fortune Most Powerful Women’s alumna and a lead program partner to the U.S. Consulate General in Lagos, Nigeria. She partnered with the U. S. Consulate General in Lagos to run the inaugural Academy for Women Entrepreneurs (AWE), a White House/Department of State initiative designed to support women entrepreneurs with knowledge, networking and funding to start and grow their businesses.

She is the founder of two  not-for-profit organizations, Ascend Studios Foundation, for capacity building and social, educational and economic empowerment of women and youth in underserved communities; and, the Africa Children’s Creative Network – to discover and nurture creative skills in school age children.

Zitha was instrumental in building Encounters’ partnerships with: Sichuan TV Festival in China, which took seven local films and two filmmakers to a festival in China; the French Embassy on the first Africadoc SA writing residency, designed to develop African documentary cinema; and the 2012 partnership with Al Jazeera English, which saw 20 African documentaries pitch to the global broadcaster. In her current role, Zitha is committed to the development of emerging talent in the documentary industry.

Betty Sulty-Johnson has extensive experience in sales, project management, TV and film distribution. She co-founded and managed the very 1st Film Festival celebrating Black Women in front and behind the lens from 2005 to 2009,  Images of Black Women Film Festival in London. With the support of the UK Film Council, the Festival had the privilege of discovering and financing new short film directors.

Jessica Hagan is Africa No Filter’s Program Lead, leading on programs and grant-making within the Arts & Culture and Media space. Jessica has firm knowledge on Africa’s booming creative Industries and has over the years developed a database of creative practitioners, organizations and funders who contribute to this ecosystem.

Through her previous role as Arts Project Manager for British Council Ghana & West Africa, in which she was the youngest project manager in the entire organization which operates in over 110 countries, Jessica was able build her grant-making and funding knowledge. She worked closely with Foreign Commonwealth Office and the British High Commission to strengthen relations between the UK and Ghana through Arts & Culture Programming.

Register for the webinar here: https://bit.ly/LadimaWOI