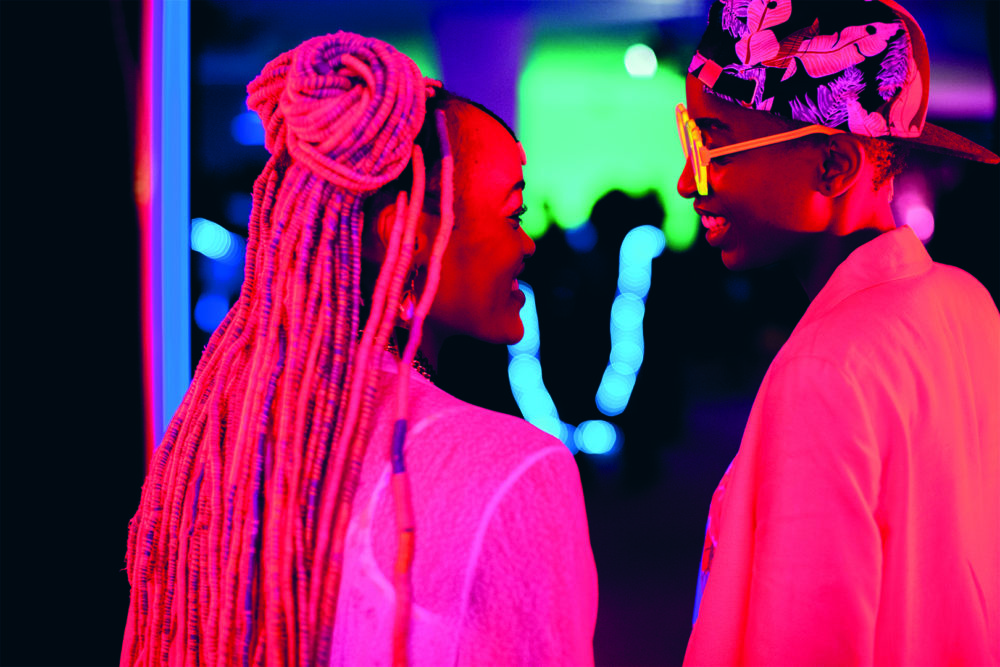 “Good Kenyan girls become good Kenyan wives,” but Kena (Samantha Mugatsia, who won Best Actress at Carthage 2018 and FESPACO 2019 for the role) and Ziki (Sheila Munyiva) long for something more. When love blossoms between them, the two girls are forced to choose between happiness and safety.

Rafiki has a 94% critics rating on Rotten Tomatoes, with Variety calling it “impossible not to celebrate”; RogerEbert.com “a lyrical ode to finding a kindred spirit amidst an uncaring majority”; AV Club “bursting with life”; and Washington Post “a small revelation, not least because it marks the breakthrough of a filmmaker of such exhilarating, cheerfully courageous vision.”

Rafiki was nominated for the Un Certain Regard and Queer Palm Awards at Cannes 2018, as well as a 2020 GLAAD Media Award for Best Limited Release Film. The movie catapulted director Wanuri Kahiu onto Time Magazine’s 100 Next list in 2019 and launched her career internationally. She’s now adapting Octavia Butler’s Wild Seed for Amazon Prime and Ali Benjamin’s The Thing About Jellyfish for Universal, among other projects.

Wanuri was drawn to Rafiki because of the shortage of African love stories on screen. “I was in my late teens when I first saw a film about young Africans in love. Before that, I had never seen any Africans kiss. I still remember the thrill, surprise and wonder and how the film disrupted my idea of romance. Before then, affection was reserved for foreigners, not us. To imagine that it was normal for Africans to hold hands and kiss on screen was astonishing.”

She realised there was an even bigger shortage of lesbian love stories set in Africa when she read Monica Arac de Nyeko’s Caine Prize-winning short story, Jambula Tree, on which Rafiki is based. “I was caught off guard again,” she remembers.  “As a romantic, I had to bring to life the tender playfulness of the girls in Jambula Tree and as a filmmaker, it was vital to show beautiful Africans in love and add those memories to cinema.”

Rafiki, co-produced by South Africa’s Big World Cinema and co-written by South African Jenna Bass (Flatland), became the first Kenyan film to compete at Cannes, but, like Jim Chuchu’s 2015 Berlin Teddy Award winner Stories of Our Lives, the movie was banned by the Kenya Film Classification Board (KFCB) for its homosexual theme. In Kenya, gay sex is punishable by jail time.

Wanuri sued Kenya’s government to allow the film to be screened and become eligible to be submitted as Kenya’s entry for the Academy Award for Best Foreign Language Film at the 91st Academy Awards. On 21 September 2018, the Kenyan High Court lifted the ban on the film, allowing it to be screened in the country for seven days – to sold-out audiences – to meet the eligibility criteria – although it subsequently lost out to Likarion Wainaina’s multi-award-winning film Supa Modo as Kenya’s 2019 entry. In April 2020, a Kenyan court refused to lift the ban on Rafiki.

“While filming, we challenged deep-rooted cynicism about same-sex relations among the actors and crew, and continue to do so with friends, relatives and larger society,” says Wanuri. “Rafiki brings to the forefront conversations about love, choice and freedom, not only freedom to love but also the freedom to create stories. We hope this conversation reminds us that we all have the right to love, and the refusal of that right through violence, condemnation or law violates our most fundamental raisons d’être: the ability for one human being to love another. “

But while Rafiki deals with serious issues, please don’t box this as an ‘issue film’ or ‘agenda art’.  In her 2017 TED Talk, Wanuri introduced her concept of Afrobubblegum. “When I started to write my own science fiction and fantasy, I was surprised that it was considered unAfrican. So naturally, I asked: what is African? And this is what I know so far: Africa is important, Africa is the future (it is, though), and Africa is a serious place where only serious things happen. So when I present my work somewhere, someone will always ask: ‘What’s so important about it? How does it deal with real African issues like war, poverty, devastation or AIDS?’ And it doesn’t… It’s nothing incredibly important – it’s just fun, fierce and frivolous.”

“My hope is that the film is viewed as an ode to love, whose course is never smooth, and as a message of love and support to the ones among us who are asked to choose between love and safety,” says Wanuri.