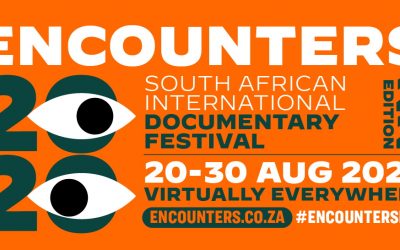 Encounters South African International Documentary Festival is set to run from 20 – 30 August 2020. The festival will be available to everyone, everywhere in South Africa .

Encounters cements its place as Africa’s leading documentary festival as it celebrates its 22nd year by making most of the films free-of-charge to view on virtual platforms, but will also screen at selected cinema venues in Johannesburg and Cape Town.

The investigative journalists and filmmakers Richard Poplak and Diana Neille, who directed the film, say they can’t wait to see the response from South Africans. “In the end, Influence is a triumphant South African David and Goliath Story in which our country collectively stood up against the abuses of a powerful multinational…and won. We’re thrilled and so proud to finally be bringing it home.”

“During this challenging time of COVID-19, the courageous step toward a new kind of film festival has been a monumental team effort,” says Encounters Festival Director Mandisa Zitha,” and the result of innovative action from all sides of the film sector.

After two decades offering South African and international audiences compelling and groundbreaking documentaries this move into the digital arena sees Encounters at the cutting-edge of cinema’s next wave.”

Over the coming weeks the Encounters team will announce its digital plan that will aim to make this year’s selection of films available to everyone on the internet. The objective, say the team, is to create a festival accessible to all – whatever your preference – on the big screen and online.

A Time For Influence

“The decision to open the documentary festival with Influence was a no-brainer,” says Zitha, “Encounters has become the home of thoughtful, character-driven storytelling that adds a necessary dimension to our understanding of the news, fake news, the hot button issues, other people’s lives and, above all, ourselves and our place in the world.”

Influence, by journalist-provocateurs Richard Poplak and Diana Neille, charts the rise and fall of the infamous London-based PR firm Bell Pottinger. As audiences and reviewers around the world attest, the film is a stark reminder of the dangers that lurk within the post-truth era, in which masters of disinformation use new digital tools to wage ancient propaganda wars — undermining the very fabric of democratic societies.

The film has only become more urgent in the wake of the Covid-19 crisis, where the media zone is flooded with so much “news” that it’s difficult to tell up from down. “If anything, the pandemic crisis has made bad actors like Bell Pottinger appear even more dangerous,” says Neille, “even the President of the United States is peddling miracle cures that have no solid basis in science. We certainly didn’t anticipate that when we turned on the cameras more than two years ago.”

“We feel our film will help audiences appreciate the relationship between politicians, corporations and the media” added producer Neil Brandt of Storyscope. We hope Influence will play a role in pulling back the veil and helping people navigate the uncertain times ahead of us.”

There will be more exciting films and events served up, which will be announced in the coming weeks.

The National Film and Video Foundation of South Africa is a funder of the 22nd Encounters South African International Documentary Festival.