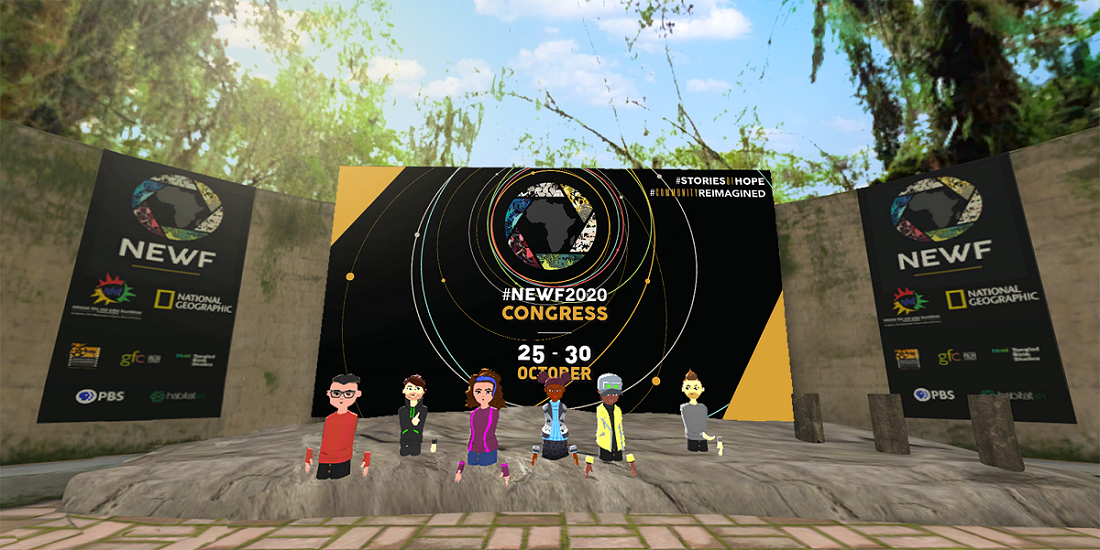 The NEWF2020 Congress (the annual Nature, Environment & Wildlife Filmmakers Congress) will take place in a real-time virtual world from 25 – 30 October.

NEWF adapted to the reality of the times and have created a truly virtual congress. Delegates will represent themselves as Avatars, and literally interact, engage and network with other delegates and speakers at the Congress. Participating delegates will be loaned a VR headset or provided access to a desktop app which allows their avatar entry into the NEWF Congress.

“NEWF is known for the sense of community felt at the Congress and so we chose not to offer an online platform and decided to host NEWF2020 in a virtual world,” says Pragna Parsotam-Kok, Executive Director, NEWF Congress. “We are using Social VR which allows the avatars of delegates to literally attend in various locations – for example, networking will take place at a watering hole; the panel discussions will be at an outdoor amphitheatre in a forest, film screenings will be held in a cinema, with glass windows through which you can see the starry night sky and we are honoured to host the National Geographic Photo Ark exhibition in an underground cave . We have been working with great developers at Habitat XR who have designed and created an array of lifelike “worlds” for our avatars to inhabit.”

Despite the pandemic and changing circumstances, the core NEWF vision remains: NEWF is the only platform in Africa aimed at bringing together nature, environment and wildlife filmmakers, scientists, conservationists and broadcast media to engage, contribute and connect whilst creating a path to conservation through film, amplifying the challenges faced by the natural world and driving solutions through impactful creative science communication.

“As all the unheeded warnings about species extinction, climate change and pandemics come home to roost, we say don’t bury your head in the sand, don’t give up because together in our re-imagined community we will share our Stories of Hope and inspire a call to action.”

Through an integrated slate of programmes NEWF is inspiring and incubating emerging science, nature, wildlife and conservation storytellers in digital media in Africa.  Dedicated to discovering the next generation of filmmakers, the N.E.W Pitch Competition will once again be held at NEWF2020 where five young film-makers will each win R 50 000 to produce a short film.

An exciting component of this year’s Congress is Virtual Meets Reality where our broadcast partners will air selected films from the NEWF Congress programme, creating an additional daily platform for strategic audience development – reaching, impacting and activating public audiences around Africa. SABC 2’s 50|50 have been airing films since August and a NEWF Film Festival with broadcast on People’sWeather (DSTV channel 108), Africa’s first and only free 24/7 weather, environmental news and lifestyle channel during the week of #NEWF2020.

“We are looking forward to sharing stories of hope during these uncertain times and whilst a partial physical event is possible we have taken the decision to proritise the safety of our delegates from around the globe and rather connect in a re-imagined virtual NEWF world. We will announce the full programme and speakers soon.”