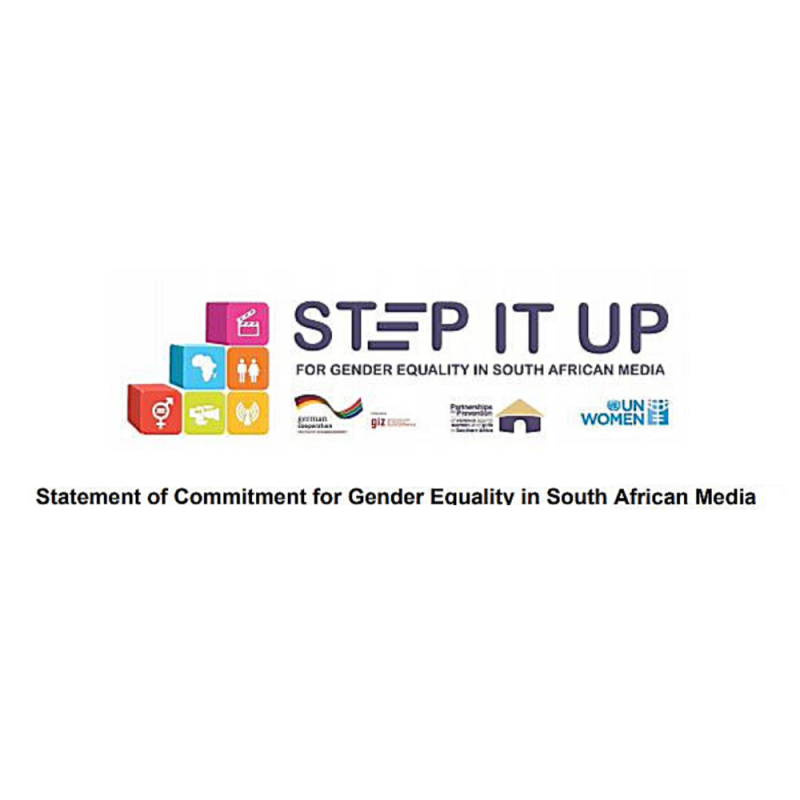 The official launch of The Step It Up ‘Statement of Commitment for Gender Equality in South African Media’ campaign was hosted by UN Women South Africa and the GIZ – Partnerships for Prevention of Violence against Women and Girls programme (PfP) on 26 August 2020.

In partnership with industry, civil society, government and regulatory bodies, the campaign aims to actively fight gender-based violence (GBV) and promote gender equality in South Africa by calling on the media and entertainment industry to uphold the following three key commitments:

2)     Un-stereotyping entertainment and storytelling; and

3)     Creating an equal and safe space behind the scenes.

Anne Githuku-Shongwe, a representative for UN Women’s South Africa Multi-Country Office (SAMCO) and Martin Weiss, GIZ Office South Africa Country Director, highlighted the need for a discussion on the challenges the media and entertainment sector is facing in terms of gender equality. They elaborated on how the Step It Up project developed the Statement of Commitment for Gender Equality in South African Media: “The Statement of Commitment initiative aims to fight GBV, calling on media organisations to step up and make a change. We’re going to unpack how self-reflection and voluntary commitment can make a substantial change within and beyond the industry itself,” said Weiss. “If we are to truly confront the scourge of GBV in South Africa, we need to get to the root of the problem. We need to interrogate the causes and not just look at alleviating the symptoms. Norms and stereotypes perpetuate patriarchy which is an underlying cause,” said Githuku-Shongwe.

The crucial role of media in achieving gender equality was highlighted by Tamara Mathebula, Chairperson of the Commission for Gender Equality (CGE). “The industry is shaping norms and stereotypes through storytelling, images and audio-visual representations of men, women and gender-non-conforming persons. The media plays a significant role in influencing the nation. What we consume across media platforms informs how we think about ourselves and society at large in terms of gender and GBV,” she explained. “Transformation is needed, and we all need to play our part,” she added.

The ‘Statement of Commitment’ in a global context was also discussed at the virtual event and a panel conversation focused on unpacking its content and relevance in shaping an industry that is geared towards gender equality. The panel consisted of the Executive Director of the South African National Editors Forum (SANEF), Kate Skinner; the CEO of the National Film and Video Foundation (NFVF), Makhosazana Khanyile; the CEO of Health-E News, Portia Kobue; and CEO of Yellowbone Productions, Layla Swart.

The voluntary signing of the ‘Statement of Commitment’ motivates South African news and entertainment media organisations and practitioners to reflect and take on the roles and responsibilities that come with the influence they hold. It is meant to guide the way for signatories to become a positive force in this country’s struggle with gender inequality and GBV.

For more information about The Statement of Commitment for Gender Equality in South African Media, visit: www.partnershipsforprevention.org or contact Luxolo Matomela on luxolo.matomela@giz.de. Sign the Statement here.