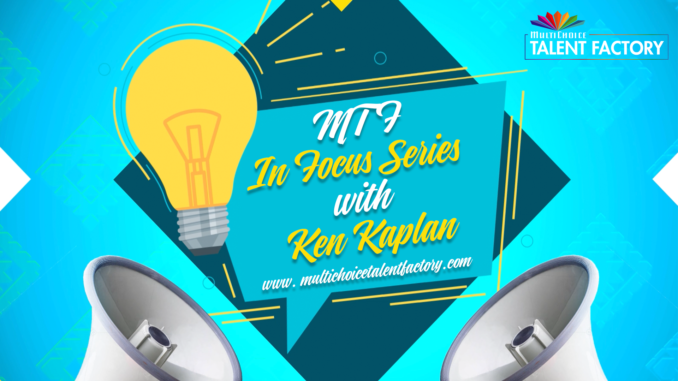 The MultiChoice Talent Factory (MTF) is excited to launch the In Focus masterclass series hosted by South Africa-based film and TV veteran Ken Kaplan! The Series comprises of pre-recorded conversations now available on the MTF Portal.

The masterclass series will see Kaplan in virtual conversation with some of the most formidable creative technical professionals in Africa’s film and TV industry. Kaplan has had over 25 years’ experience in film and TV and has worked on various local and international features as a producer, director, creative executive, and distribution, among others.

Masterclasses have been a crucial feature of the MTF shared-value initiative since its establishment in 2018, and have been held in various African countries in line with one of MultiChoice Africa’s strategy of technical and creative knowledge sharing as a means of empowering emerging and professional creatives.

“Investing in the next generation of storytellers on a technical and creative level is something that has been at the heart of the MTF initiative. We’re excited to launch MTF In Focus, a series of in-depth virtual conversations with leading filmmakers from across the continent,” says Reatile Tekateka, Group Executive Head Corporate Affairs: MultiChoice Africa.

The MTF Masterclasses is an important training platform alongside the MTF Academies, a 12-month regional fully funded training programme aimed at upskilling the next generation of passionate young film creatives. The academy is also the first touchpoint of the MTF shared-value initiative, with a one-of-a-kind curriculum that MultiChoice Africa has tailored alongside its partner Mnet channels as well as its curriculum support partners including the Henley Business School Africa, Pan-Atlantic University in Lagos, Kenyatta University in Nairobi, and the University of Zambia in Lusaka, among others.

The first conversation of In Focus masterclass series with Kenyan producer, Appie Matere is now available on https://multichoicetalentfactory.com/ for all registered users to access. If you’re not yet registered on the portal, click here to register!

Running order and description for each masterclass:

In this MTF “In Focus” Masterclass, Ken Kaplan is in conversation with Appie Matere, leading Kenyan producer based in Nairobi with an impressive list of film and TV credits to her name.

Vuyani Sondlo is a South African editor with notable feature films and TV credits to his name. In this MTF “In Focus” Masterclass, Ken Kaplan discusses Vuyani’s works on the feature film VAYA (2016), directed by Akin Omotoso, and explores his technique in editing this multi-layered drama.

Kabelo “KB” Thathe has steadily made a name for himself as cinematographer in South Africa. In this MTF “In Focus” Masterclass, Ken Kaplan dissects KB’s work and his collaboration with director Akin Omotoso on the movie VAYA (2016).

In this MTF “In Focus” Masterclass, Ken Kaplan is in conversation with director Akin Omotoso to talk about his early work, his method, his inspirations and his collaboration with other filmmakers and artists.

In this MTF “In Focus” Masterclass, Ken Kaplan is in conversation with Michael Cross, a prolific documentary filmmaker, to talk about his process and his approach to his work.