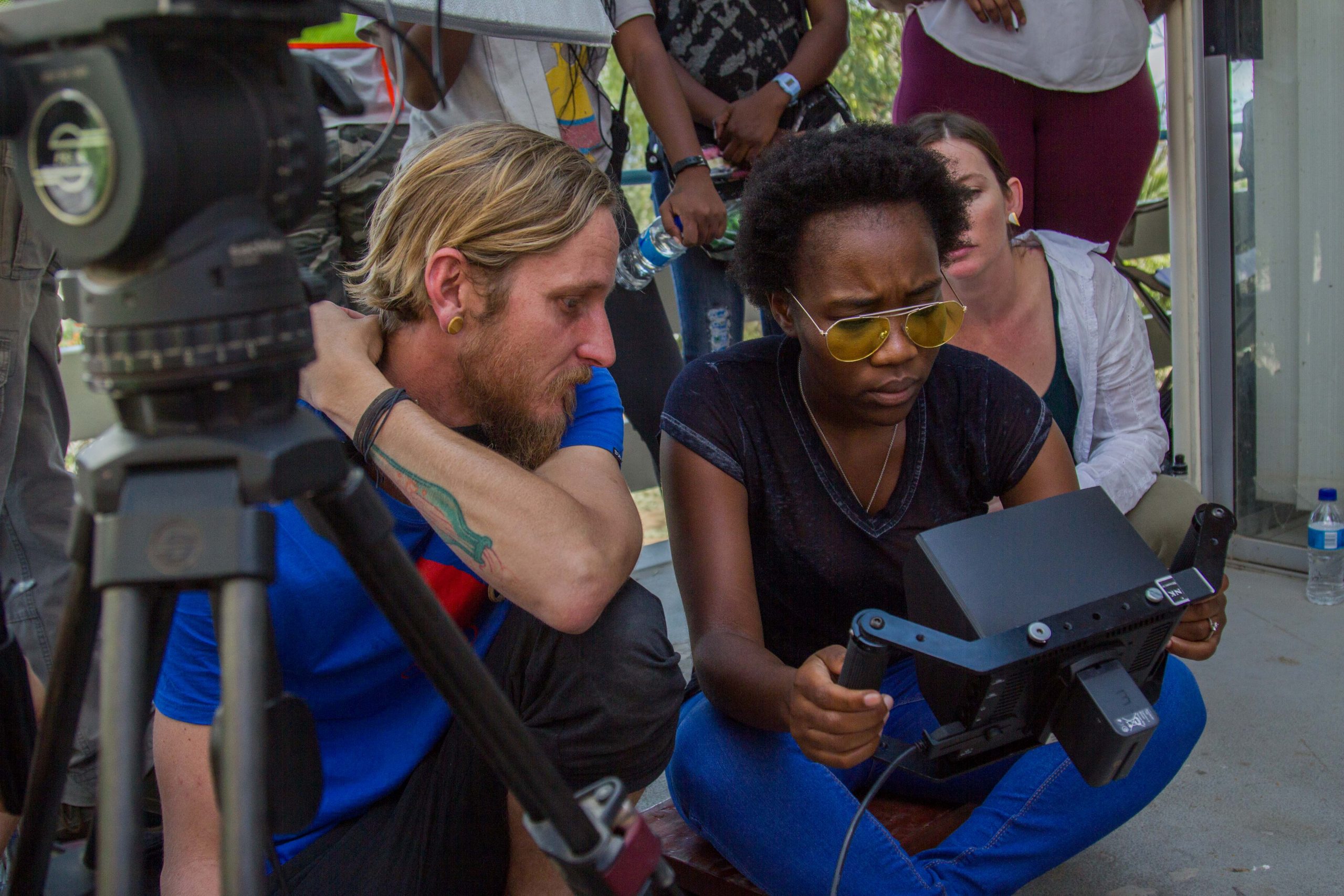 Desiree Kahikopo-Meiffret is an award-winning director and producer with 12+ years’ experience in the Namibian ﬁlm and theatre industry as an actress, creative director and playwright.

A Talents Durban alumna, Desiree’s debut ﬁlm, The White Line, premiered at the Durban International Film Festival last year and went on to win multiple awards at the Namibian Theatre and Film Awards 2019 and the African Emerging Filmmakers Awards 2019.

“As a young filmmaker, it is important to learn as much as you can about the industry and how it works because it’s so much more than just shooting a film… Know that nobody is going to give you anything or present you with anything. Ultimately, whatever it is you want to do, get up and do it.” – Desiree Kahikopo-Meiffret

I started in film as an actress more than 12 years ago. The only roles I would get would be as an extra in NGO productions, I once got a lead though as a nurse. At the time all I could do was write my stories down and hope I would find somebody who would take my stories on and make them come to life visually, as I had no experience to even think about it. To be honest working in film, the way I wanted to, from where I stood, seemed so far away and a huge mountain to even attempt to climb.

My first real experience in the film industry came when I worked as a Line Producer on Vickson Hangula’s film Fish Out Of Water. So when I came up with the story idea for The White Line I wasn’t thinking of directing. Somewhere during the process of working on the script, I asked myself, ‘if you don’t give yourself the opportunity then who will?’ Having little experience in film, I decided to direct The White Line myself.

As a filmmaker, what kind of stories do you enjoy telling most?

The stories that I want to tell are stories about the human experience in Africa, elevating our people, our lives and our stories whether it is set in the past, the present, the reimagined present or the possibility of a future we envision with no limitations of what those stories are and how they are told – not just limited to Namibia as well but from which ever part of Africa I am inspired to tell it from. My stories will also always have women in the lead because I did not grow up seeing women in all their complexities on African screens as much as I should have.

I am busy developing 3 projects, the drama-comedy Rose on Concrete; the psychological drama, A Whisper in the Wind that I am collaborating on with scriptwriter Patience Nitumwesiga from Uganda (scriptwriter) and producer Menzi Mhlongo from South Africa; and The Warrior Princess – an adventure-drama written by Tokoloho Masemene.

Your debut feature film The White Line premiered at Durban International Film Festival (DIFF) last year and won at the Namibian Theatre and Film awards 2019. Tell us a bit about the film?

The White Line is a romantic historical drama, set in 1963 in South West Africa (Namibia), in the height of South Africa’s apartheid rule in Namibia. It tells a story about a black maid who falls in love with a white police officer. Their love for each other grows over time through the letters they write each other. Their love endures many obstacles – one being the colour of their skin.

The White Line is a riveting untold love story about a man and woman who do not see race and colour, subconsciously going against society’s norms and finding solace in love in an era where love was restricted to only loving your kind. The White Line will shed light on the untold love stories of apartheid and what is now the new Namibia.

Why did you want to tell this story?

I wanted to tell this story because for me there weren’t many, if any, stories about Namibia’s history and the difficulties that our people were faced with; being oppressed, being marginalised, being killed. But I didn’t want to tell a story of the obvious violence that occurred in that period of time, because that has been told already, but rather approach it from the different perspective of interracial relationships – of love, not rape in that period of time.

What is the current state of the Namibian Film & TV industry in your opinion? And are there opportunities for young, emerging filmmakers such as yourself?

The Namibian film & TV industry is still in its infancy but progressing slowly, there is a lot of talent and all this great potential with no strong infrastructure in place, so it’s a working battle. When it comes to opportunities for emerging filmmakers such as myself, the opportunities are very limited, so most of the time you have to create your own.

As a young filmmaker, it is important to learn as much as you can about the industry and how it works because it’s so much more than just shooting a film. I learnt a lot while shooting The White line – most of which were hard lessons. Know that nobody is going to give you anything or present you with anything. Ultimately, whatever it is you want to do, get up and do it.

With regards to diversity and gender-equality in the Namibian film & TV industry, what is the climate like in your experience?

From my experience thus far the Namibian film industry is quite racially diverse behind the camera, but not as much in front – there we can do more. I feel gender equality is on a good track in front of the camera but this is not so when it comes to production. I do believe that its ultimately up to us as producers and directors to push for both diversity and gender equality in front of and behind the camera, and that’s what we did with The White Line and that’s what I am looking to do with my immediate next project – Rose on Concrete – because we are a diverse nation. I would say that the Namibian Film Commission pushes for gender-equality on projects too. What I love in Namibia is that there is so much room for growth and to build structure that we can be proud off.

What has been the biggest challenge of your career thus far?

Access to financiers, investors and funding is and has been one of the biggest challenges, as well as distribution/exhibition of my projects – not just in Namibia but on the continent.

What has been the highlight of your career in the industry?

Breaking that barrier and taking that step to do my first feature with little experience and where it has gone and the doors it has opened up for me.

What’s next for Desiree Kahikopo-Meiffret?

My immediate project is Rose on Concrete which I am getting ready to submit for funding. Hopefully if all goes well I will go into production early next year. I am also working on finishing development on A Whisper in the Wind for which I will be looking for financiers – it is a cross-border collaboration set in two different countries, so I am excited about that.