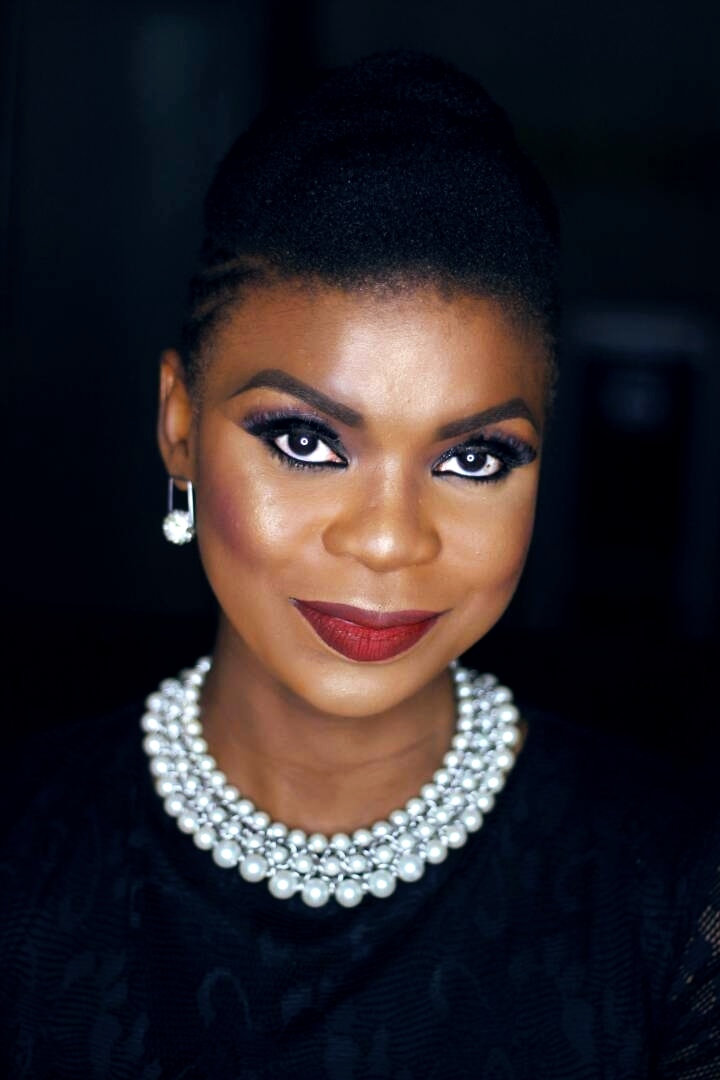 Filmmaker, writer and actor Belinda Doubara Yanga-Agedah is a graduate of the University of Glasgow in Scotland where she specialised in Film and Television Analysis and Arts and Media Informatics. Belinda is passionate about visual storytelling and performance, as well as African popular culture and its representation in film. In 2009, she founded the production company Rhythm Media Enterprise (RME PICTURES) which has produced and co-produced both narrative and documentary films, and is focused on promoting alternative forms of storytelling while also exploring the sustainable development of African cinema in current world affairs. Belinda returned to Nigeria in 2013 to pursue Filmmaking and Acting in her home country.

I have always wanted to be a storyteller but having Nigerian parents in the 80s/90s meant you had only a limited number of aspirations; doctor, lawyer, engineer. I chose Engineering but I always knew at the back of my mind I will end up in Film/Theatre – Entertainment. I attended the University of Glasgow in Scotland studying software engineering, and one day my course supervisor called me into her office to have an interesting conversation. She said she had noticed my inclination towards Film, as I was always looking for ways to involve the science of Film into my engineering course. I said yes, what I wanted to do was Filmmaking and when I was done with my degree, I was going to pursue Film. She advised me not to waste 4 years doing something I had no desire to pursue. She helped me get into the Film and Theatre Studies department where I had to start my studies from year 1 again as I had no prior art course electives to transfer directly. I was surprised when my parents were in support after I told them my plans considering they were paying very expensive international students tuition. I graduated and the rest they say is history. I went fully into the industry until I came back to Nigeria to pursue my dreams.

You studied Creative and Cultural Studies at the University of Glasgow, Scotland and lived there for many years. What fuelled your desire to return to Nigeria to work?

LOVE? Lol. I was in a long distance relationship with my boyfriend, now current spouse, and I saw myself building a life with him. We both saw ourselves building and adding to the greatness of Nigeria. Honestly, I always wanted to tell black stories and stories about the black African experience. I had this vision of building an arts centre that catered to the building of African arts, culture and entertainment and its exportation to the world. Kind of what Asian entertainment (Korean/Bollywood) was doing and I felt Nigeria was the perfect place to build this dream since it was sort of like a blank canvas. There were so many possibilities and the political and economic space then was very promising. At the time that I came back, so many Nigerians were coming back too with the idea of exploring these possibilities.

You founded your own production studio, RME Pictures in 2009. What kind of content does the company produce?

Rhythm Media Enterprise (RME pictures) is a film and television company focused on producing all types of digital content to be distributed through traditional and non-traditional distribution platforms. We are particular in promoting alternative forms of storytelling while also exploring the sustainable development of African cinema in current world affairs. We make Films, TV Series, Visual Marketing Campaigns and Documentaries – but the key is to experiment with alternative forms of telling stories. For example, we are currently in pre-production to produce our first web-series and a TV feature-length movie which will both be shot on Phone. The goal of this is to gather data and see if there are any noticeable differences with audience consumption if content is shot using phones as opposed to professional cameras.

What has the experience been like as a woman founding your own production company in the industry?

It has been alright. Women are at the top of their game in Nollywood. If we want to talk about Jade Osiberu, Mo Abudu, Mary Njoku, Funke Akindele and Blessing Egbe, just to name a few, women in Nollywood don’t wait around to be discriminated against or if they are, they don’t see it. We just wake and do. So for me, I just basically focus on my vision for myself as a creative and my business. All the challenges I face are mostly tied to the Nigerian condition; mediocrity, lack of good infrastructure, inept skill set, corruption etc. all of which I would still face regardless of whichever industry I was in because of the bad Nigerian condition.

The appetite for African cinema and content has and continues to increase on a global level. With this is mind, where and how do you think the African film industry needs to change/improve in order to produce more content that can travel?

I am speaking specifically for Nigerian cinema: Funding and more funding. Funding schemes and grant systems. Improved production value – I cannot over emphasize the need for this. Improved production value is tied to skillset; we desperately need to improve skills in the industry by providing training for better writers, actors, cinematographers, producers, assistant directors, art directors etc. Film is science and craft as well as an art form so we cannot disregard the place of trainings and education which is thoroughly lacking in the industry.

For Africa Cinema: I think funding and more major collaborations. I think we need to push for out of the box co-productions and collaborations for market maximization which might give us better negotiating power.

With regards to diversity and gender-equality in the Nigerian and African film & TV industry, what is the climate like in your experience?

Gender in-equality is a major issue in Nigeria generally but like I mentioned earlier, women in the Film and TV industry pay no attention to these obstacles, they just roll their sleeves up and get the work done. That is not to say the issues are not there and do not affect other women, but we have a better chance at getting our works produced, at collaborating and lifting up other women in the industry. We are more empowered to empower others. From conversations had and read, we seem to be in better position to push for better working conditions than our counterparts in other countries.  What we need to work on now which isn’t particular to women filmmakers alone, is access to distribution and funds. In summary, the sky is only the limit. I am very optimistic.

What was been the biggest challenge/s of your career thus far?

Funding, Funding and Funding. Funding has been my biggest issue and because funding is an issue, salary and what I earn as a director is nothing compared to what my counterparts earn internationally. Constantly looking for financing for the films we want to produce is such a headache and Nollywood is at a bigger disadvantage. This is because unlike other industries that at the least have government and private bodies issuing grants and funding schemes, Nollywood is completely on its own and is mostly fully funded by private personal monies.

No Highlights. I am honestly just enjoying the journey and trying to put in place systems that make me a working filmmaker and actor in addition to being a global filmmaker. I just want to be given the space to create. I want to keep creating. But I was super proud of our first collection of short films produced when RME was initially set up. The production value wasn’t the best but we were very proud that we set out to produce these shorts and we actually did.

For me personally, I am taking on work, fully. Directing fully, Acting fully, writing fully and producing fully. Especially in these Covid-19 times, I am grateful for any opportunity to create.

For RME Pictures, we are going back to our original vision which is telling stories in non-traditional forms. We have been distracted for the past few years as we try to raise funding for our first official commercial feature film. But now we just want to produce a series of short-films, an Anthology series and a web-series to be shot on phone. I am excited for the future despite these trying Covid-19 times. It is very uncertain currently but I am still excited.