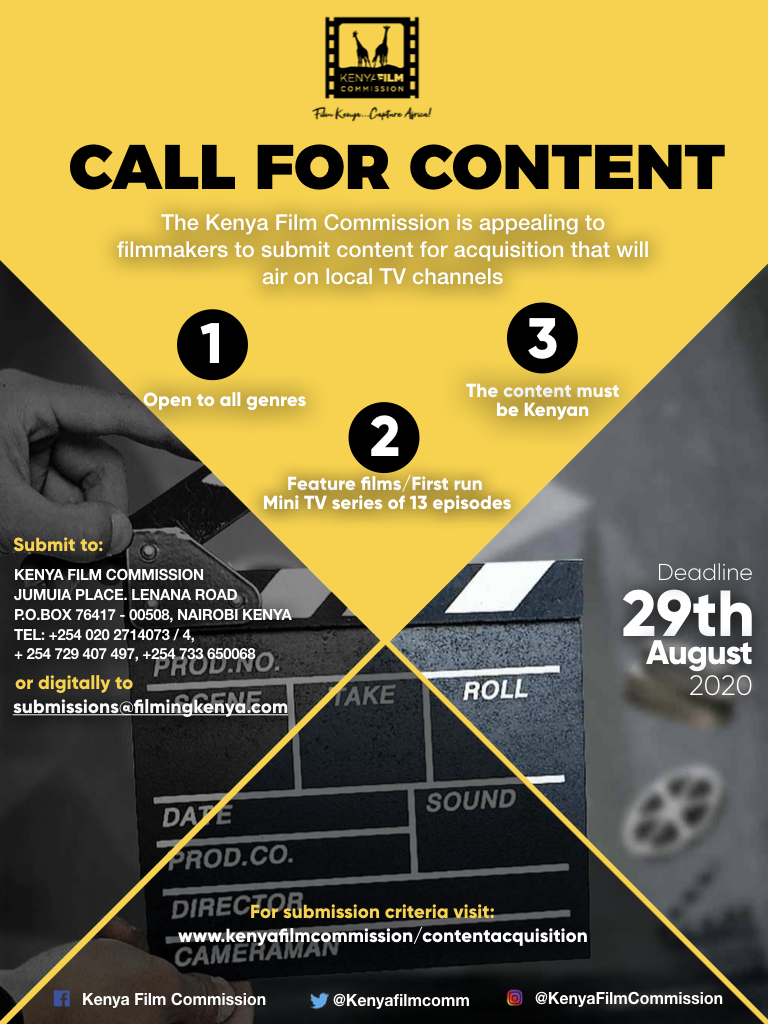 The Kenyan film industry has for a long time suffered from the lack of a distribution channel for locally produced content. The Kenya Film Commission (KFC), in fulfillment of its mandate of promoting the local film industry, has partnered with a local broadcaster to sustainably promote the development and exposure of local audio-visual content.

As part of the Film Empowerment program, the KFC will acquire content from local film producers and companies for showcase on local TV channels.

Films that run a minimum of 60 minutes which have either premiered or not and may have screened in festivals. The Commission will acquire a screening license from the producers/production company for two screenings at a local TV channel.

Mini TV series that run between 20-25 minutes and that have never run in any station (first run series). The Mini TV series should be a complete mini-series of 13 episodes and will air on a local TV channel. Producers with a minimum of three (3) episodes can however submit them for consideration.

Please Note: Acquisition of Films and TV series is subject to vetting and approval by the acquisition committee.

Feature films should be a minimum of 60 minutes. Mini TV series should be between 20 and 25 minutes in length per episode.

Consideration will only be given to a Mini TV series of 13 episodes.

Producers/Production Companies submitting must be tax compliant (Tax compliance certificate must be attached).

All films/TV series submitted for consideration MUST be classified by Kenya Film Classification Board (KFCB). The film must comply with government regulations on taste and decency. www.kfcb.co.ke

No restriction on when the production was done.

Only one submission per title is required i.e. do not submit the same content more than once.

For mini TV series, the Commission will only consider a submission MINIMUM of three (3) episodes.

Each submission should include:

For Physical Submission, drop off your Film or Mini TV Series at the address below:-

For Digital Submission, submit your Film or Mini TV series via Wetransfer or Dropbox to the email: submissions@filmingkenya.com . A fully completed form should also be submitted together with the film.

Submission deadline: All entries must be received by 29th August 2020.