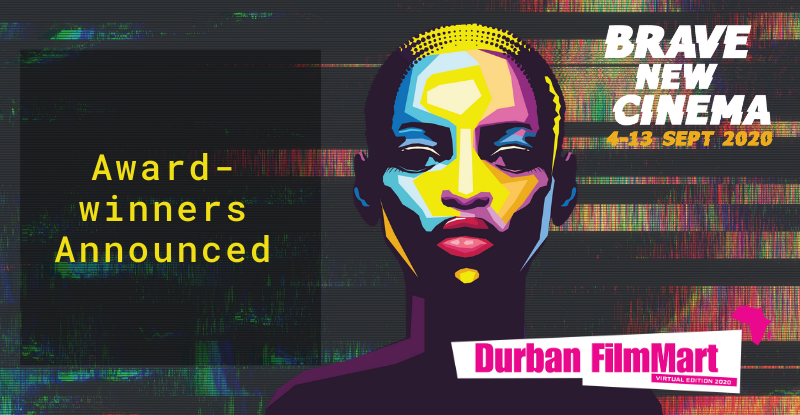 After 10 days packed with virtual panel discussions, conversations, presentations, pitches, and meetings, the 11th Durban FilmMart ended on a high with the announcement of the 2020 Official Awards for Projects on Sunday, 13 September. The 2020 winners are from South Africa, Zimbabwe, Uganda, Mozambique, Democratic Republic of Congo, Kenya, Morocco, Togo, Egypt and Tunisia.

A total of 64 projects were selected to participate at the DFM, Africa’s premier co-production and finance market.  These included: 32 official fiction and documentary projects,  26 Talents Durban projects and 6 Jumpstart projects.

“We were impressed by the high quality of project submissions that were pitched to the various broadcasters, financiers, investors, markets and producers at our first virtual edition,” says Mandisa Zitha, Chairperson of the Board of the Durban FilmMart Institute. “What is coming through in these projects is an overall boldness, and willingness of filmmakers to push the boundaries of their uniquely African stories. We are delighted that through our partners and funders that some of these film projects will be given the opportunity to develop further through some very generous grants and awards provided.”

The CineMart Award sponsored by the co-production market of the International Film Festival Rotterdam (The Netherlands), went to The Accident (South Africa), produced by Khosi Dali and directed by Imran Hamdulay. The filmmakers will be able to attend the Rotterdam Lab, a five-day training and networking event for producers in 2021.

The Produire au Sud of Festival des 3 Continents (Nantes, France))/ IFAS Award went to We All Fall Down (Zimbabwe), directed and produced by Tapiwa Chipfupa. Ms Chipfupa will be given the opportunity to attend the developmental workshop programme, PAS, where they are supported with developing tools, expertise, and opportunities to forge European networks.

The Sørfond Award (Norway) was awarded to the project Vlees van my Vlees (Flesh of my Flesh) (South Africa) produced by Lucia Meyer-Marais and Jozua Malherbe and directed by Matthys Boshoff. The filmmakers have the opportunity to attend a pitch course, as well as pitch this project at the Sørfond Pitching Forum in Oslo, Norway.

The DoK Leipzig Award (Germany) went to  The House is Burning (South Africa) directed and produced by Sara Gouveia and co-produced by Natalie Geyser. These filmmakers will now participate in the 2021 DoK Leipzig Industry Programme and are given an opportunity to do a public presentation of the project in the DOK Co-Pro Market or DOK Preview Presentation.

International Documentary Film Festival of Amsterdam (IDFA) Award  (The Netherlands) was given to The Ship and the Sea (O Navio e o Mar) (Mozambique) produced by Lara Sousa, co-produced by Matheus Mello, and directed by Lara Sousa and Everlane Moraes allowing them to participate in IDFA 2020 virtual event later this year.

Festival International de film Documentaire d’Agadir (Morocco)  (FIDADOC) Awards went to the Talents Durban project To Be Loved (Togo) directed by Justin Kpatchaa and Pan Africa & The Ticking Time Bomb (Kenya) produced by Jean Meeran and directed by  Eva Njoki Munyiri providing the filmmakers with the opportunity to participate in the FIDADOC Writing Residency in December 2020.

These projects will be given mentorships through one of IEFTA’s partner development programmes and labs.

DOK.fest München Award (Germany)  was given to The House is Burning (South Africa) directed and produced by Sara Gouveia and co-producer Natalie Geyser who will participate in the DOK.forum Marketplace.

Miradas Doc Award (Spain) was given to Rising up at Night (Democratic Republic of the Congo), produced by Dada Kahindo, Rosa Spaliviero and directed by Nelson Makengo which includes participation in the Miradasdoc 2021.

The Durban FilmMart platform is still open to registered delegates to review presentations, pitches and network until 30 September.