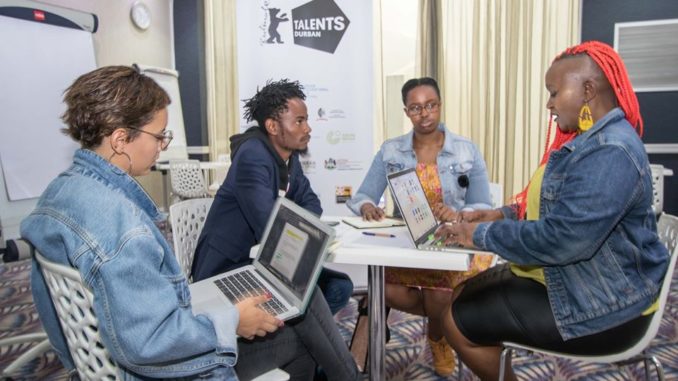 The Durban FilmMart Institute has announced the participants of the 14th edition of Talents Durban, within the official Durban FilmMart, which takes place virtually from 16-25 July.

Founded in partnership with the Berlin International Film Festival and the Berlinale Talents project, Talents Durban is a highlight on the Durban FilmMart calendar. The 5-day training and development programme offers Talents a unique opportunity to engage with award-winning filmmakers and directors in a series of seminars, workshops and masterclasses.

This year, Talents Durban introduces Francophone projects from the African diaspora as it continues to inspire a sense of community on the continent by representing many languages and cultures. After a rigorous adjudication process, 28 projects and 6 film critics from 16 countries across the continent made the final cut with 6 fiction features, 4 episodic, 5 animations, 6 documentaries, 7 fiction shorts films, and 6 film critics being selected.

More information of our Talents can be found here.

Doc Lab is a hands-on training programme where participants who have submitted their documentaries are mentored by industry experts.

Animation Lab is open to animation directors and screenwriters who get one-on-one mentorship on character and visual development and animation in Africa.

Mahad Ahmed Hashi – is a Kenyan filmmaker who worked as a Somali translator before moving into films. His debut film, Wazi.fm won an award at the Zanzibar International Film Festival.

Bonie Sithebe – is a South African producer. With years of industry experience behind her, Sithebe co-owns a film, video and television company Durban Motion Pictures.

Wilfred Okiche – is a Nigerian film cand culture critic and a familiar face at the Durban International Film Festival.

Wanjeri Gakuru – is a freelance journalist and filmmaker living and working in Nairobi. She is an alumna of the 2014 Farafina Creative Writing Workshop and a member of pan-African writers’ collective, Jalada.

Kenneth Gyang – is a young Nigerian filmmaker whose film Confusion Na Wa was a DFM project in 2010 that went on to accumulate a number of awards around the world, including Best Film at the 2013 African Movie Awards.

Philippe Lacôte – is a Côte d’Ivoire film director. His 2014 film Run was a nominee for the Best French-Language Film at the 20th Lumières Awards. Last year, Lacôte’s film Night of the Kings was awarded the Amplify Voices Award at the 2020 Toronto International Film Festival.

Kaouther Ben Hania – is a Tunisian film director is most known for her film Beauty and the Dogs which was selected for the Best Foreign Language Film at the 91st Academy Awards.

Ben Hania’s 2020 film The Man Who Sold His Skin was nominated for the Best International Feature Film at the 93rd Academy Awards.

With principal funding from the Durban Film Office and Ethekwini Municipality, the Durban FilmMart will present a comprehensive online programme of discussions, masterclasses and hangouts in addition to the Finance Forum, thereby contributing to the growth of film industries across Africa.

Register for the Durban FilmMart here.