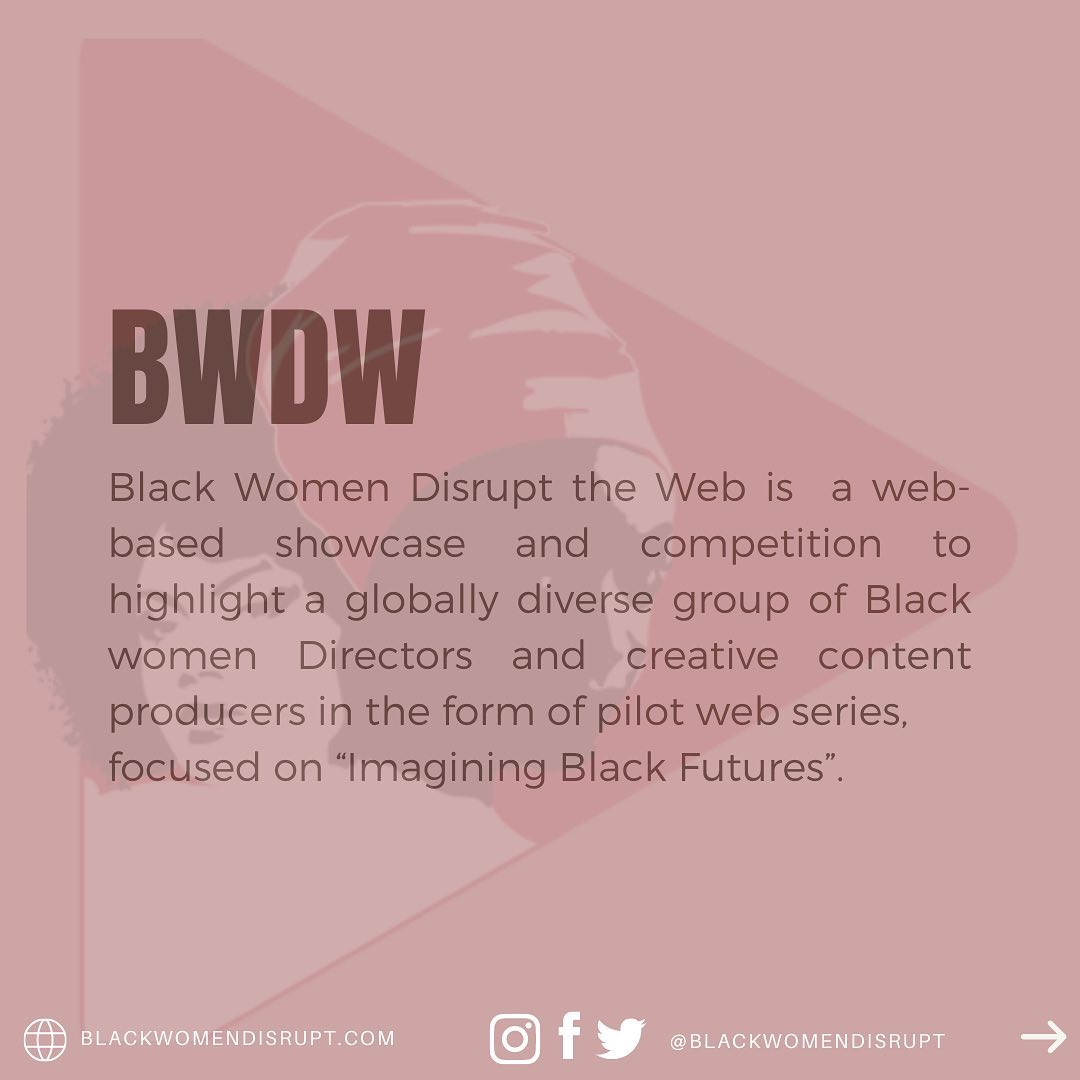 Black Women Disrupt, along with Antoinette Engel and Dylan Valley, are announcing a new project: Black Women Disrupt the Web (BWDW). This is a global competition to produce an original web series showcase. The call for entries aims to attract proposals from Black women writer-directors from Brazil, Colombia, Kenya, and South Africa for three (3) three-minute episodes providing new perspectives on the theme, “Imagining Black Futures”.

Black women from Brazil, Colombia, Kenya, and South Africa are invited to submit original proposals for a fictional web series before March 1st. A selection committee will choose five (5) semi-finalists to receive dedicated mentorship, production funding, professional development and inclusion in a global, online, web series showcase that will be evaluated by an esteemed panel of judges in July. The winner will receive a cash prize alongside support in navigating distribution, networking events, markets and festivals. Submit here.

“The goal is to celebrate the richness of a broader and multilingual African diaspora and to raise its visibility worldwide through outstanding works of fiction film content made available on the web.” Zakiya Carr Johnson, Founder, Black Women Disrupt

Black Women Disrupt the Web seeks to elevate interest and investment in content created by Black women from the African continent as well as the African diaspora in the Americas, Europe and around the world. Through an accessible online showcase in several languages, the collective will connect communities using new platforms to share stories, engage in dialogue and explore economic empowerment.

“Web series as its own particular form of internet-based television has broadened and transformed the film and TV landscape. Web series have lower barriers to entry, and as such Black women creators (shout out Issa Rae!) who would have normally been marginalised in the mainstream, have gone on to transform what the mainstream looks like.” Dylan Valley, Filmmaker

Black Women Disrupt the Web will partner with a VOD platform for a global showcase of the final content. The competition will offer an online Master Class series for applicants, as well as access to the Black Women Disrupt network, resources and special online events. Each of the five semi-finalists will be matched with mentors to guide them in script development, production and post-production, as well as the basics of industry business and marketing. Black Women Disrupt the Web will document the process of each submission, from editing through to the final cut and into festival participation and promotion. Virtual panels, workshops, events and communication opportunities will raise the visibility of the finalist, who will be awarded a package that includes distribution support and a cash prize.

COVID-19 has had an unprecedented impact on the world and disproportionately affected Black communities, laying bare the existing inequities and divides in our societies. Black Women Disrupt (U.S.) alongside filmmaker Dylan Valley and producer Antoinette Engel (South Africa), recognize that artists in particular have been dealt a severe blow, specifically those in the film industry which requires extensive on-site collaboration. Yet many artists continue to produce work and create solutions to our ‘new normal’ under the strict but necessary social distancing guidelines.