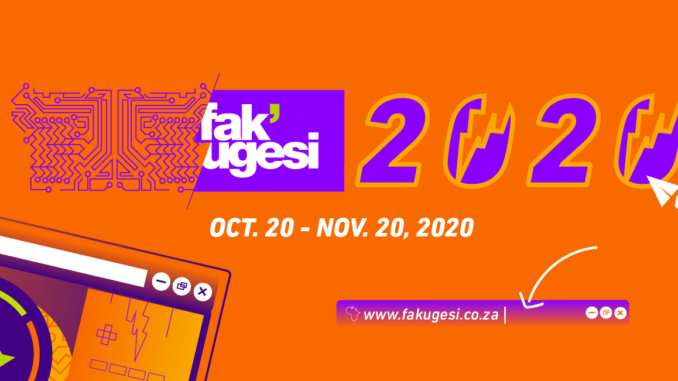 The 2020 Fak’ugesi Digital Innovation Festival is set to take place online from 20 October to 20 November 2020. Now in its seventh year, Fak’ugesi is a celebration of technology and creativity by Africans for Africa. Under the theme #PowerToThePixel, the 2020 festival aims to bring regional and international audiences together through three major focus areas – African Digital Art, Heritage and Technology – and the ever-popular gaming-centred Fak’ugesi Arcade.

A major festival highlight this year is the work of anonymous South African artist aka Xopher Wallace, who is the Fak’ugesi Festival 2020 #PowerToThePixel featured augmented reality (AR) artist. Not only is he a winner of one of the curatorial commissions for Digital Art with an exhibition titled The Afridelic Trip: Faces of Mixed Realities but he is also the featured artist for the official 2020 #PowerToThePixel face filter for Instagram, Facebook and Snap Camera. Using the Fak’ugesi iconography, Wallace’s face filter allows users to change between ‘Cyborg’ and ‘Third Eye’ to encapsulate the meeting of technology, culture, and the spirit of Fak’ugesi, try it out on Fak’ugesi’s Instagram.

The virtual programme launches with the opening of eight online digital art exhibitions, which will be Always On and Free, taking place online on Instagram, Facebook and WhatsApp. These and other contributions in the African Digital Art lineup will explore everything in digital culture today from the lives of South African teenagers in matric living through a global pandemic to the premiere screenings of short animations from the Tshimologong Development Studio’s Young Director Programme.

The exhibitions include five special commissions by five extraordinary new African digital art curators and are the outcome of an Africa-wide curator bootcamp led by Fak’ugesi in June and July this year and include:

Other unmissable highlights in the African Digital Art leg of Fak’ugesi 2020 include industry pitches from the winners of this year’s Digital Lab Africa in Immersive Media, Animation, Gaming, Interactive Media, Digital Music and Digital Art. The programme will include various industry panels, skills exchanges and networking opportunities like ‘Meet the Digital Creatives’.

From 23 October, the festival shifts focus towards Heritage and Technology with an inspiring lineup including:

Prize-giving and closing ceremony of the #HackUrCulture Hack-a-thon – a month-long starting on Heritage Day, 24 September and commencing on 23 October; an initiative led by Fak’ugesi partners Credipple and Goethe Johannesburg beginning on Heritage Day.

The much anticipated Fak’ugesi Arcade kicks off in November with the exhibition People of Play: African Game Developers, curated by Games Industry Africa writer Vic Bassey, which aims to celebrate and acknowledge gaming’s growing foothold across the African continent as well as the game developers, producers, writers and digital artists behind the industry.

This year’s gaming programme will include industry talks, skills exchanges and will also see Fak’ugesi partner, the French Institute of South Africa’s Novembre Numerique hosting a game-jam with a particular focus on South African game development.

Pre-register for early access and tickets to limited and special events at Fakugesi.co.za.